About Us | The Everett Railroad

In August 1984, at Claysburg, PA, Everett Railroad GE 80-Ton #4 made a delivery of bauxite ore to the General Refractories Company. That train marked the rebirth of a railroad that had been dormant since 1982. In those two years, the railroad had been abandoned, sold, and moved from its home in Everett, PA, where it had served its namesake community since 1954.

The new Everett Railroad was based in Claysburg, PA, on seven miles of railroad between Brookes Mill and Sproul, PA that Conrail had deemed excess. Two customers, Champion Homes and General Refractories wished to see rail service resumed. Working with those companies, the Everett restored the former-Conrail trackage and began operations on an as-needed basis.

In 1985, the Everett Railroad leased the nearby Morrisons Cove Railroad, a seven-mile line which served the fertile “Cove” region of Blair County including the communities of Roaring Spring, Martinsburg, and Curryville. With this expansion, the Everett Railroad became a key link in local agriculture and dairy production, serving three feed mills as well as a major paper converter. Increased traffic led to the purchase of two EMD SW9s from Conrail: 8933 and 8990.

Also, during that time, the railroad hauled its first tourists since the early 1970s as the National Railway Historical Society operated several excursions over the railroad.

Expansion occurred again in 1995 with the incorporation of a sister company, the Hollidaysburg & Roaring Spring Railroad (H&RS) which acquired ten miles of Conrail’s “Cove Secondary” track. This purchase tied together the Everett Railroad and Morrisons Cove Railroad operations and created what is today a twenty-three-mile rail network. Now, the railroad typically operates scheduled trains three days per week, with special service available on request. Interchange for the Everett Railroad is with Norfolk Southern at Hollidaysburg, PA.

Of the Everett Railroad

Bloody Run, the community that would become Everett, is incorporated.

The Pennsylvania Railroad (PRR) and H&BTM complete construction of a railroad between Mount Dallas, just south of Everett, and Bedford, PA. The H&BTM is the PRR’s only friendly connection to this new railroad, which is eventually extended to Bridgeport (Hyndman), PA and Cumberland.

The Pennsylvania Railroad connects the Bedford Division to home rails by completing a few miles of railroad between Brooks Mill, PA and Imler, PA. The new railroad brought service to East Freedom, Claysburg and Sproul. Much of the traffic that was sent over the H&BTM is diverted to an all-PRR routing. H&BTM tonnage drops significantly.

Shippers and community members, concerned with preserving rail service to Everett, band together to raise funds to buy the southernmost 4 miles of H&BTM trackage.

Plans for the Everett Railroad to begin operations are approved. Two steam locomotives from the H&BTM, 2-8-0s #37 and #38 are considered as power, but are ultimately rejected. The new management settles on a surplus Conemaugh & Black Lick (C&BL) Whitcomb 65 Ton Center Cab, #56, which was stored at Johnstown, PA.

The Pennsylvania Railroad delivers Number 56 to the H&BTM interchange at Mount Dallas. Later that day, Number 38 picks up the locomotive and hauls it to Saxton, where crews, in conjunction with staff from the C&BL, prepare the locomotive for service. The fire in Number 38 is dropped, and the H&BTM operates for the remainder of the month using the Everett’s diesel.

The Everett Railroad retires ex-H&BTM Cabin Car 16, the last piece of equipment from that railroad in regular service. It is now preserved at the Railroad Museum of Pennsylvania.

Tatesville Silica closes, and the Everett Railroad loses its biggest customer. From this point until 1982, freight business begins a slow and steady decline from which the railroad would never recover.

A tourist railroad is born

Inspired by the success of the East Broad Top and Strasburg Railroads, management makes the decision to enter the excursion business. 2-6-2 Number 11, a former-Morehead & North Fork Baldwin, is purchased and rebuilt. Passenger equipment is acquired from the Erie Lackawanna, Reading, and the Baltimore & Ohio.

Whitcomb #56 is replaced with another Whitcomb of the same type, #6506.

Excursion operations begin with great fanfare and lead to a successful first year.

Excursion attendance continues a precipitous decline that began in 1966, and the railroad hands off operation of the excursions to the South Penn Chapter of the NRHS.

The Everett Railroad completely exits the excursion business, selling all equipment to the Williams Grove Park and Historical Society.

Hurricane Agnes occurs and much of the northeast’s rail network is damaged, some beyond repair. Included in the casualties is the portion of Penn Central’s Bedford Secondary between Bedford and Hyndman, the location of an interchange with the Baltimore and Ohio. Service is never restored south of Bedford, and all Everett traffic from this point must move via Hollidaysburg.

The Staggers Rail Act of 1980 is signed into law, deregulating the railroad industry. Railroads now have the ability to eliminate low-density and redundant routes. The Bedford and Mount Dallas Secondaries are on the list of those lines that Conrail would like to eliminate.

Conrail officially terminates service on the Mount Dallas and Bedford Secondaries, completely severing the Everett’s outside connections. As a result, the Everett abandons operations.

The Everett Railroad is sold to new ownership. The existing tracks are sold for scrap and real estate and buildings are sold off. Locomotive #4 is retained, however. At the same time, the railroad’s new management purchases the northernmost 8 miles of Conrail’s Bedford Secondary, between Brooks Mill and Sproul. Locomotive #4 is moved to the new line. An office and shop are established at Claysburg, PA.

Number 4 proves to be underpowered for daily service and the railroad acquires the first of two EMD SW9s from Conrail.

The Everett Railroad leases the Morrisons Cove Railroad, which has owned the southernmost six miles of the former-Conrail Cove Branch, between Roaring Spring, Martinsburg and Curryville.

A new railroad, the Hollidaysburg & Roaring Spring, is formed to acquire Conrail’s Cove Branch between Hollidaysburg and Roaring Spring. The Everett Railroad furnishes all crews and equipment for the new sister company and new offices are constructed at Duncansville. The first large power arrives in the form of ex-Chesapeake & Ohio GP9 6051.

After 21 years as an independently-owned operation, the Morrison’s Cove Railroad is purchased by and merged into the Everett Railroad.

The Hollidaysburg & Roaring Spring Railroad is merged into the Everett Railroad, unifying all twenty-three miles of Everett-operated trackage under one corporate banner.

With the bulk of heavy repairs completed at the Western Maryland Scenic Railroad’s shops in Ridgeley, WV, Everett Railroad locomotive Number 11 is transported to Claysburg, PA for completion of restoration work.

The first steam-powered excursion, a Pumpkin Patch Special, operates between the railroad’s newly-completed depot in Hollidaysburg and Kladder.

PHOTOS OF OUR TRAINS 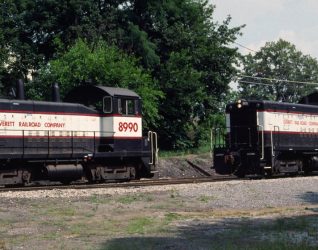 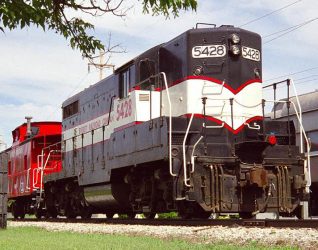 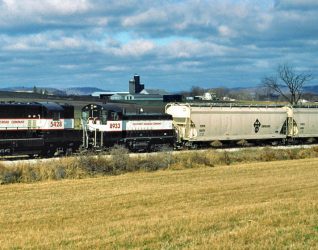